In Mystic Class Nona Grey begins to learn the secrets of the universe. But so often even the deepest truths just make our choices harder. Before she leaves the Convent of Sweet Mercy Nona must choose her path and take the red of a Martial Sister, the grey of a Sister of Discretion, the blue of a Mystic Sister or the simple black of a Bride of the Ancestor and a life of prayer and service.

All that stands between her and these choices are the pride of a thwarted assassin, the ambition of a would-be empress wielding the Inquisition like a blade, and the vengeance of the empire’s richest lord.

As the world narrows around her, and her enemies attack her through the system she has sworn to, Nona must find her own path despite the competing pull of friendship, revenge, ambition, and loyalty.

And in all this only one thing is certain. There will be blood.

If you saw my review of Red Sister, you might be surprised that I’ve continued with this grimdark fantasy trilogy, but I have to give credit where credit’s due. I wasn’t a fan of the writing style in Red Sister (which is why I listened to parts of it rather than read it) and I do still think the plotting was all over the place and very confused, but I couldn’t get Lawrence’s characters out of my head.

After finishing Red Sister, and being very disappointed that I didn’t love it more, I couldn’t stop thinking about Nona and Arabella and Abbess Glass and Sisters Kettle and Apple, and when I discovered the audiobooks of both Grey Sister and Holy Sister are on Scribd, I thought I’d give the second book a try. If I listened to it and still didn’t enjoy it, I’d DNF it and give up on this series, but I wanted to give it a second chance and I’m so glad I did because I enjoyed this second book so much more.

Where Red Sister dragged for me and introduced things without much explanation that I struggled to get my head around, Grey Sister was a story I couldn’t stop listening to and everything I hadn’t understood in the previous book finally started to slot into place and make sense. I understood the world and the various characters’ motivations much more, and I think a lot of that had to do with the fact that we weren’t solely following Nona.

I do love Nona as a character. She’s a fairly typical high fantasy character – fantasy is hardly lacking lady assassins with tragic pasts – but the way she prioritises friendship over all other things, and how she understands the value of friendship over other bonds, is just so pure and lovely and it really speaks to me. That being said, I loved having chapters in this book that followed Abbess Glass and allowed us to see her interacting with more of the adults of this world, from her fellow nuns (I love Kettle and Apple so much) to some of this world’s leading families and all the politics that come with her position. I love Abbess Glass, and there was one particular scene between her, Nona, Kettle and Arabella that made my heart so happy.

I really enjoyed seeing Nona’s friendship with Kettle develop, too. A lot of the nuns are fairly intimidating (which is no surprise when any of them could kill you) but Kettle’s the one nun a lot of the novices really like, and her relationship with Nona is so lovely. As someone who is a younger sister, Nona’s admiration for Kettle really hit home for me and I loved it.

It wasn’t a perfect book – although we can debate until the cows come home whether such a thing even exists – but I ended up loving this one a lot more than I expected to. It crept up on me; when I got to work in the morning, I couldn’t wait until my walk back to the train station so I could carry on listening. I believe the narrator of the US editions of these audiobooks is different, which surprised me, but I’d highly recommend these editions narrated by Helen Duff. She gave every single character a voice that I immediately recognised, and I’d happily listen to anything else she narrates.

The only reason this book didn’t quite get five stars from me was that I felt like Lawrence fell back on some tropes he’d so brilliantly subverted in Red Sister. When we first meet Arabella she seems like she’s going to be that typical beautiful and bitchy popular girl until Nona gets to know her, but in Grey Sister we’re introduced to another novice, Joeli, who felt like a grimdark fantasy version of Regina George. Nona can’t get along with everyone, and there are people out there who are cruel by nature, but I half expected Joeli to be described as twirling a villainous moustache whenever she made an appearance.

That aside, I loved this book so much more than Red Sister and I can’t wait to listen to Holy Sister and finish up this trilogy! 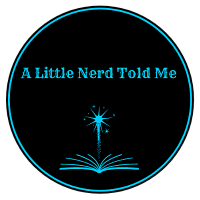 The Biblioshelf
A Little Nerd Told Me

Book reviews by an unapologetic Trekkie obsessed with dogs and books