How to Marry a Werewolf
by Gail Carriger

Guilty of an indiscretion? Time to marry a werewolf.

The monsters left Faith ruined in the eyes of society, so now they’re her only option. Rejected by her family, Faith crosses the Atlantic, looking for a marriage of convenience and revenge.

But things are done differently in London. Werewolves are civilized. At least they pretend to be.

Backward heathens with no culture, Major Channing has never had time for any of them. But there’s something special about Faith. Channing finds himself fighting to prove himself and defend his species. But this werewolf has good reason not to trust human women.

Even if they learn to love, can either of them forgive?

Many of you already know how much I love Gail Carriger’s Parasol Protectorate universe, so it should come as no surprise that I really enjoyed her latest novella set in that universe.

At long last, my beloved Major Channing Channing of the Chesterfield Channings, whose name continues to make me grin whenever I find myself saying it, is given a chance at a happy ending of his own in How to Marry a Werewolf.

Similar to Romancing the Inventor, which I read and loved last year, How to Marry a Werewolf is a little darker than some of Carriger’s other work and also provided a new kind of heroine from this world. While Romancing the Inventor introduced a working class voice, How to Marry a Werewolf introduced an American voice in Faith Wigglesworth. Carriger kills it again with the amazing surnames.

Faith is the youngest daughter of a Bible-bashing American aristocratic family who is sent to distant relatives in London in disgrace after an ‘indiscretion’ that has brought shame upon her family. It’s her family’s wish that she marry a werewolf, a punishment for something that is revealed throughout the novella, and she is sent to London because unlike werewolves in America it’s possible for English werewolves to hold titles.

As soon as she steps foot in London, Faith meets Channing and the two immediately butt heads. When they continue to meet and it becomes clear that Faith is the first woman in a while who keeps the grumpy major on his toes, Channing’s pack and Faith’s English family start pushing the two toward one another at every available opportunity.

Despite its darker elements, or perhaps because of them, this was a lovely read. Faith and Channing’s relationship isn’t an all-consuming love story, but a story of two people finding something they both need in one another. It’s not even certain that Channing will stick around, his own history with women is explored in this book, but the rest of the London pack take Faith under their wing with the promise that they’ll look after her if Channing can’t.

It was this focus on found family, from Faith’s relationship with her much kinder relatives in London to her friendship with the other werewolves, particularly Biffy, that made this novella such a sweet read for me. It isn’t only romantic love Faith desires, in an era where a woman desiring passion simply isn’t the done thing, but love in all its forms, because it’s something she’s never received from her horrid family. This was what gave me the warm fuzzies while reading this; knowing that, if Channing proves to be a pillock, Faith will still be surrounded by people who will love her rather than cast her aside entirely.

According to Carriger’s website it looks like How to Marry a Werewolf is the first in a new series of paranormal romance novellas starring the werewolves of the London pack and I am here for it. I love these werewolves, and while I do find myself missing Conall and Alexia from time to time it’s nice to see the other werewolves taking centre stage, and if the rest of them are as enjoyable as Romancing the Werewolf and How to Marry a Werewolf, I can’t wait to read them! 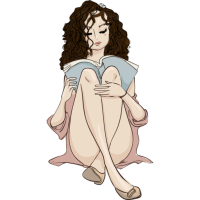